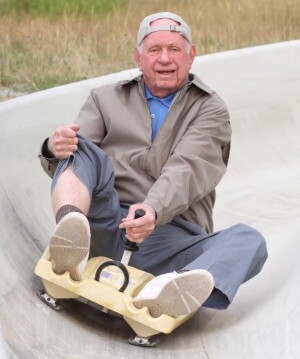 Robert Walters left this world to be with the Lord on September 29, 2021.  At the time, he was a resident at Bluebonnet Point Wellness and Rehab facility in Bullard, Texas.  He was born July 17th, 1927 in Tyler Texas at the family home to Benjamin Tillman and Minnie Ophelia Walters.  He celebrated his 94th birthday this past July with family at the Bluebonnet facility.
He graduated from Tyler High School in 1944. That summer he attended Texas A&M University and in fall transferred to North Texas State Teachers College ( University of North Texas).
In spring of 1945 Robert joined the United States Navy.  After an honorable discharge in 1946, he attended Tyler Junior College until he was offered a job with Pure Oil Company in Houston, Texas in 1947.  This was the beginning of a long and accomplished career in the oil business as scout, landman, then chief landman with American Natural Gas Production Company in Lafayette, LA.  Robert met his future wife, Gladys Louise Alton, in 1948 in New Orleans, LA.  They were married in New Orleans on September 3, 1949.
Robert and Gladys later moved to Houston and in 1964 Robert decided to become an independent landman but soon realized he did not want to spend time with contracts and billing operations. His love was landwork, buying and selling leases and visiting with the landowners during that process. So he took a job again with Pure Oil Company, then with Southern Natural Gas and, later, with Mitchell Energy Corporation in Houston, retiring in 1989.
After a number of years of retirement, Robert and Gladys moved from Houston to the Walters’ family homestead in Douglass, Texas.  Working as a landman had given Robert the knowledge and know-how to be able to reassemble the 250 acres that was the original family homestead. This acreage was part of a league and labor certificate for 1,476 acres given to Moses Walters (Robert’s great great grandfather) as an immigrant with family to help settle Texas in 1835. Preserving the homestead and creating a working ranch for his children and grandchildren to enjoy and learn their family history and the history of Texas was Robert's life dream.
Robert dearly loved his family, his work, and his farm. He was a devout Christian and treated family, friends, and business associates with honesty and fairness according to his Christian values.
Robert was preceded in death by his wife Gladys and his sister Ruth Margaret Walters.  He is survived by his daughter Patti and husband Sam Niesner of Schulenburg, TX, son Mark and wife Toni of Whitehouse, TX, and daughter Wendy and husband Jack Shimko of Ada, MI.  Grandchildren include:  Robert (Armen) Herzik and wife Wendy; Ben Herzik and wife Kristin; Alison Dominguez, Katie Porostovsky, Jared Schlinke, Kate and husband, Garrett Hopper, and 11 great grandchildren.

A private family service will be held in the family cemetery in Douglass, Texas.

In lieu of flowers, donations can be made to the Redland Cemetery in Douglass, TX,  Swan Wood-Springs United Methodist Church in Tyler, TX, Hospice of East Texas, or a charity of choice.

To send flowers to the family or plant a tree in memory of Robert B. Walters, please visit our floral store.

You can still show your support by sending flowers directly to the family, or by planting a memorial tree in the memory of Robert B. Walters