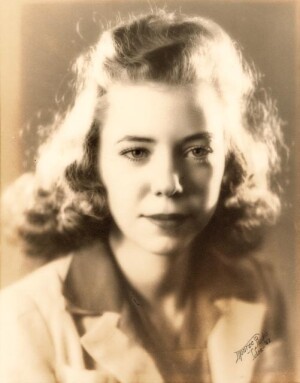 Jo Ann Inman Pye was born on May 16, 1924, to Wilma Daugherty and Earl Inman of Tulsa, OK. She was the oldest of two children. She graduated from Central High School in Tulsa and attended Oklahoma A. & M. College (now Oklahoma State University), where she was a member of Kapa Delta Sorority and worked summers at the Royal Gorge in Canon City, Colorado. She moved to Midland, TX where, while working as a secretary, she met her future husband, Jessie Young Pye of Cushing, Texas. They were married on April 2, 1949. The couple moved to South Louisiana as Jessie was employed in the Oil Industry. They lived in Plaquemines Parish where they would often host barbecues and shrimp boils for their friends and neighbors. Jessie retired in 1973 and the couple moved to Whitehouse, Texas. They remained in East Texas until Jessie’s death. Jo Ann then moved to Utah where she enjoyed the rest of her life surrounded by loving family, grandchildren, and great-grandchildren. She left this earth on April 19, 2022, to begin her new life with her Savior. Jo Ann was preceded in death by her parents Wilma Daugherty and Earl Inman, sister Norma (Pete) Santilli, husband Jessie Young “J.Y.” Pye, daughter Julie Ann Brown, and survived by her son Steven Ray (Rose) Pye, Grandsons Brian Joseph (Elicia “Niki”) Pye and Jason Bennett (Whitney) Pye, four great-grandchildren, her son-in-law Keith Brown, nieces, and nephews. Jo Ann rests in McKnight Cemetery in Cushing, TX next to her lifelong love Jessie.

To send flowers to the family or plant a tree in memory of Jo Ann, please visit our floral store.