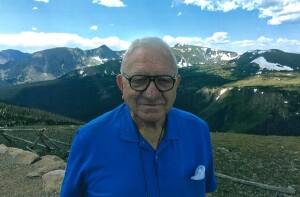 In his early years, he could always be found playing baseball or football. He loved the outdoors, and his love for fishing and hunting were unmatched. There was not a neighborhood boy who did not benefit from the squirrel and coon hunts that he hosted.  He was always willing to take as many that cared to go hunting into the woods for a good hunt.  His skillful teachings are reflected and evident in so many today. Even as his eye-sight began to deteriorate, he continued to fish whenever he had the opportunity. He looked forward to his yearly trips to Matagorda Bay with Allen and his family and living up to his generous reputation, many of his fishing trips were scheduled so that he could fry the fish for all those who attended the Whitaker reunions, of which he helped arrange for 50 years. In his later life, He would spend several days each week in his beloved Lilbert community visiting with so many who would stop by or simply wave at them as they drove by and honked. If you knew Rex well, you would know that he had an incredible work ethic. He worked at the Sunbeam Bread Company for 5 years, and worked over 40 years at Coca Cola as a route driver. These jobs were evidence of the importance he gave to hard work, and are a testament that can be seen in his three sons: Mike, Allen and Eddie. Perhaps the greatest legacy that Rex leaves behind was his compassion for everyone and his love for his family. It could be said of Rex, "He would give you the shirt off his back." It can also be said that he never knew a stranger and would stop and talk to anyone he met.

Everyone was a friend to Rex, and he was known by them as one of the nicest men they had ever met, and his kindness did not stop with his friends. His family was valued as his prized possession. He spent as much time as possible with all three of his sons and their families. Rex was at his finest when he was gathering together for family birthdays, Christmas, fishing and hunting with his grandkids, attending as many sporting events of his grandkids that he possibly could, or when he traveled to the west coast to see the sights with Mike and his California

family. Rex's blessed life was not free of tragedy however. His wife, Gladys, passed away at the age of 47. One would think with this tragedy and other hard times that Rex faced, that he might become a bit pessimistic. But, the truth is that Rex remained optimistic in spite of the difficult situations he encountered in life.  Rex Whitaker had many good qualities and was a man too hard to confine into words, but it is safe to say,"To know him was to love him."

To send flowers to the family or plant a tree in memory of Homer Rex Whitaker, please visit our floral store.